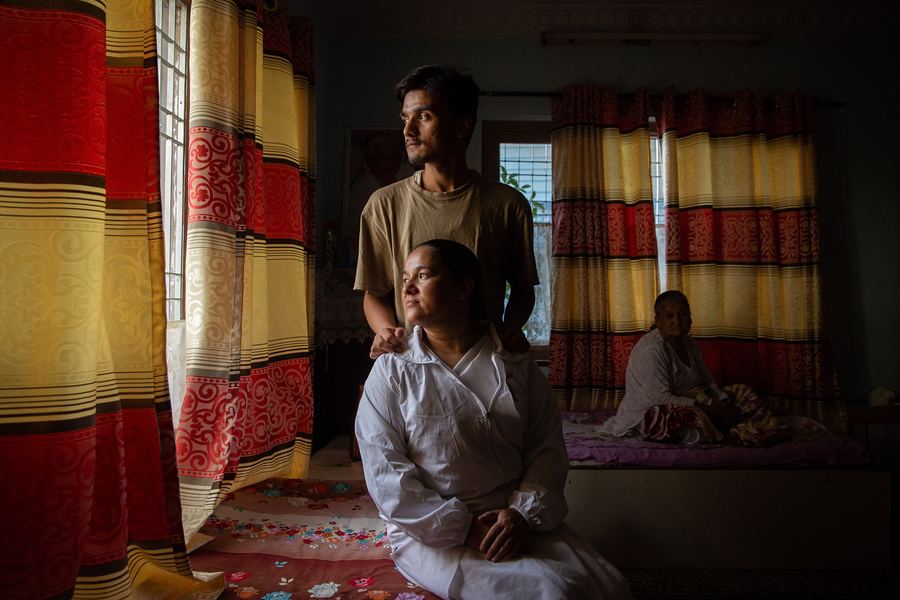 Ganga Mahat Subedi sits on her bed with her eldest son, Binayak Subedi, at the Sano Bhrayang branch of the Om Shanti hindu religious belief center where she lives in Kathmandu, Nepal on July 13, 2018. Ganga is the widow of Bidur Bahadur Subedi Chhetri, an ex-Indian soldier and security personel who was killed in a 2016 suicide bombing of Canadian Embassy security staff vehicles in Kabul, Afghanistan. According to Bidur's contract agreement the family is entitled to $300,000 USD, but have only recieved $30,000 USD. After her husbands death, Ganga has turned to religion as a way to heal and teaches meditation to others each morning. Photo by Lauren DeCicca for The New York Times 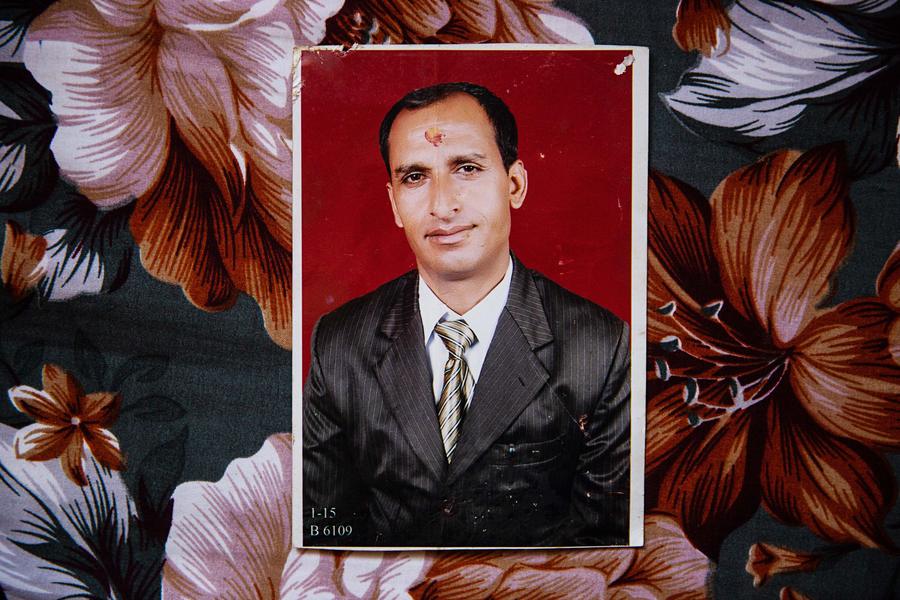 An old photo of Madhu Sudan Koirala, an ex Indian Army soldier who died in the 2016 suicide bombing of Candadian Embassy security personel, in his family's living room in Kathmandu, Nepal on July 14, 2018. The family lost their two youngest children in the 2015 earthquake and their father a year later in the 2016 suicide bombing in Afghanistan. According to their fathers life insurance policy the family should recieve $300,000 USD but have only recieved $30,000 USD. Photo by Lauren DeCicca for The New York Times 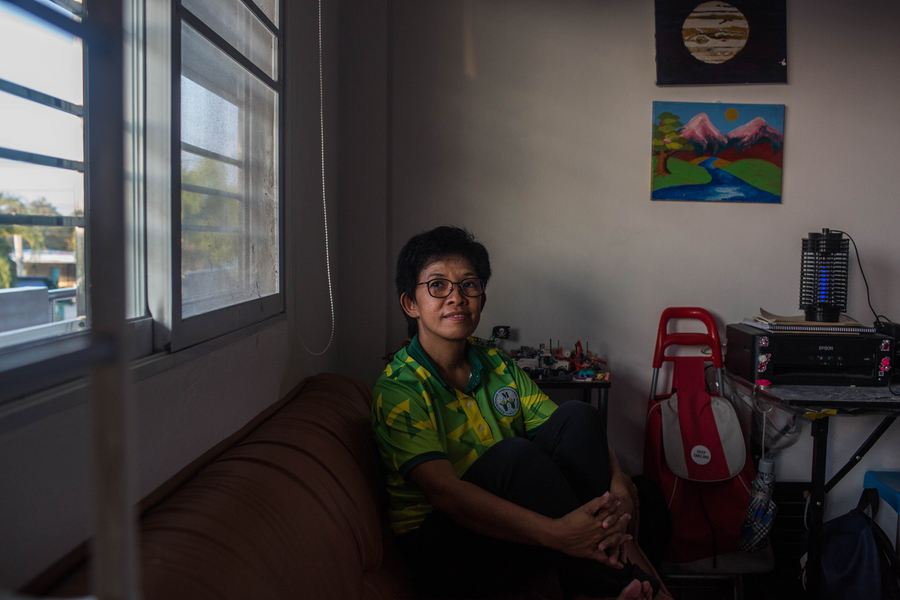 Lennie Visbal, 52, sits on the couch of the studio apartment she shares with her son on March 16, 2018 in Pattaya, Thailand. Lennie Visbal is one of many Philippine citizen's who are hoping for a new law allowing divorce in the Philippines. Lauren DeCicca for The New York Times 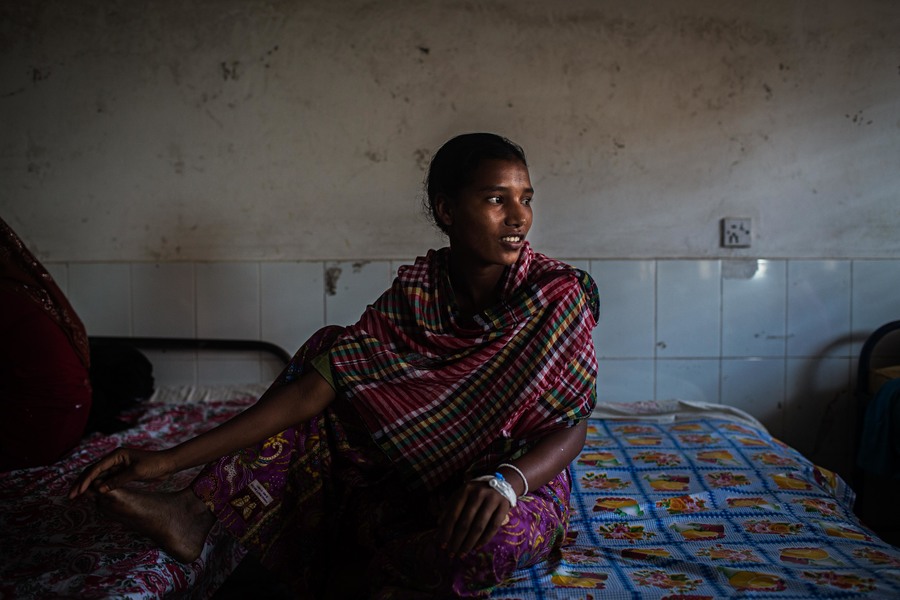 Nosima, 25, sits on one of the beds in the Cox's Bazar General Hospital, the site of a Rohingya ward for serious cases that can't be taken care of outside the makeshift clinics in the camps, on October 17, 2017 in Cox's Bazar, Bangladesh. Nosima's family's makeshift home was attacked by elephants in the Kutapalong refugee camp, leaving one of her sisters dead. According the UN over 600,000 Rohingya have fled Myanmar to Bangladesh since August 2017, with 58% of them being children. Photo by Lauren DeCicca 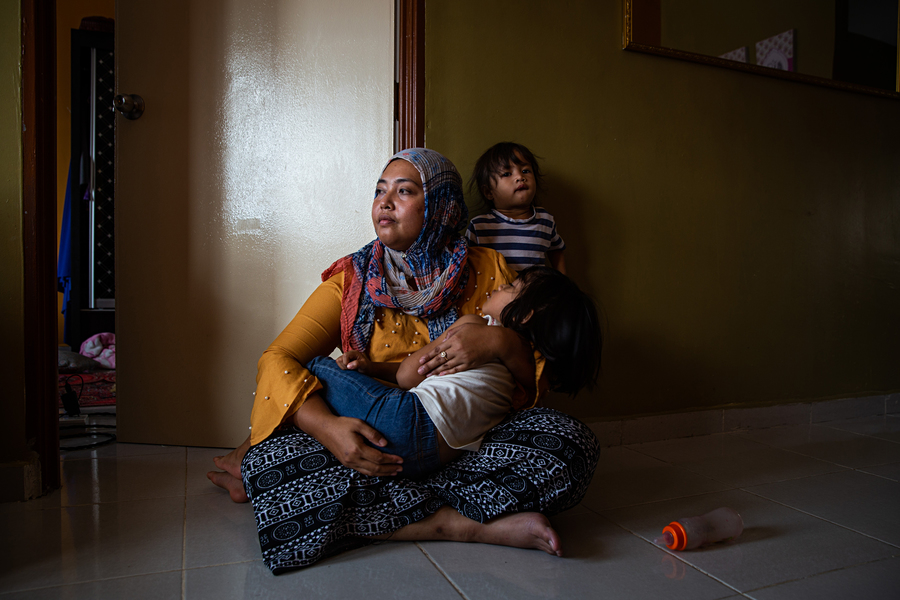 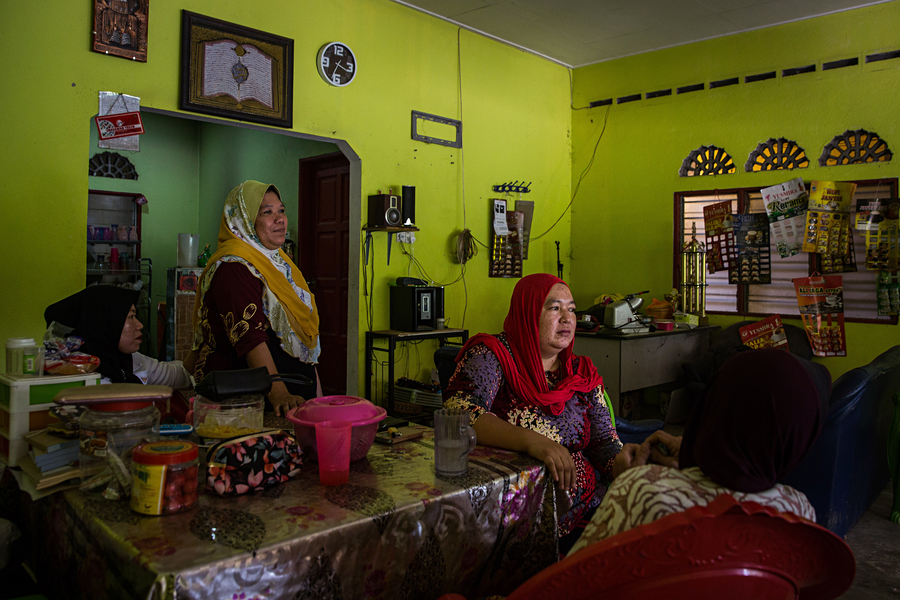 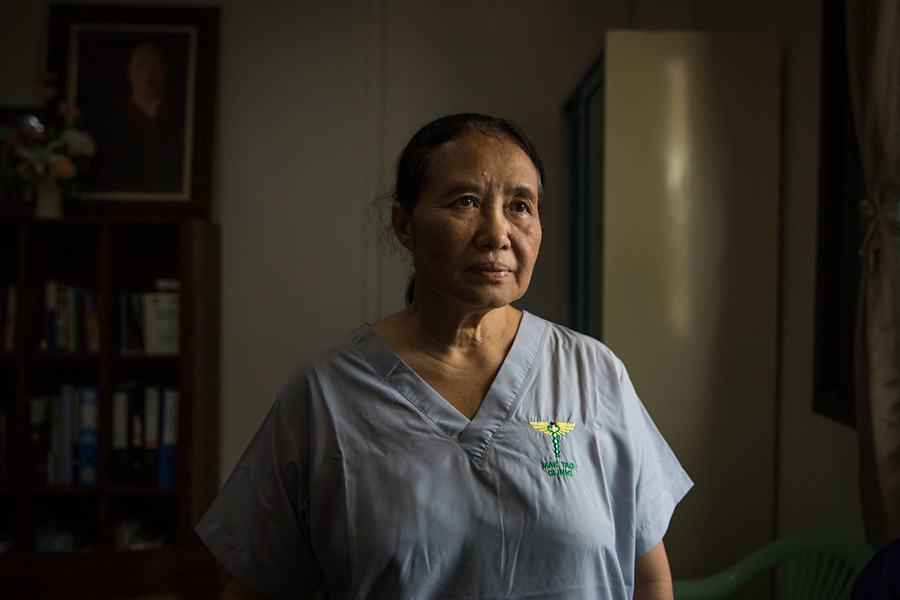 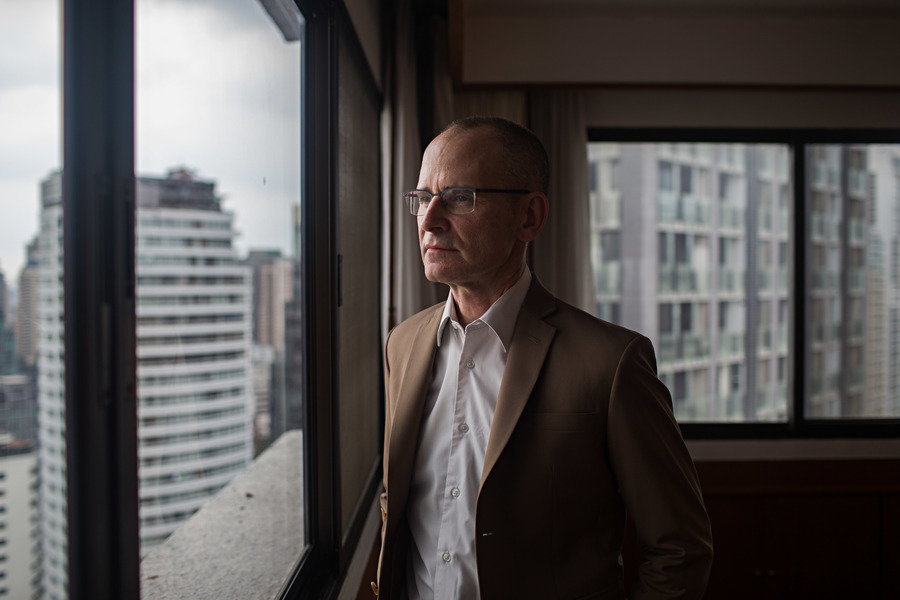 John Reed, correspondent for the Financial Times, poses for a portrait in his home in Bangkok, Thailand on November 19, 2017. Photo by Lauren DeCicca 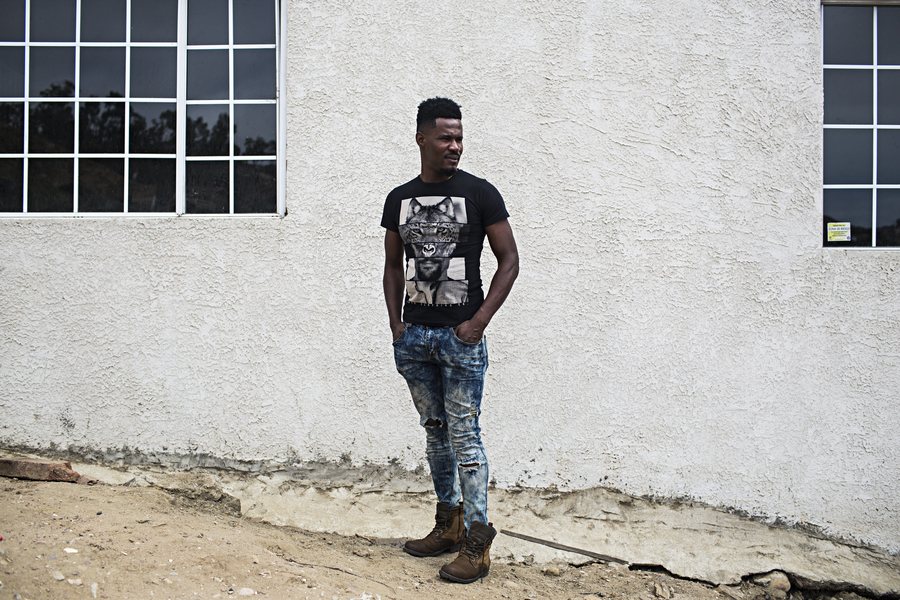 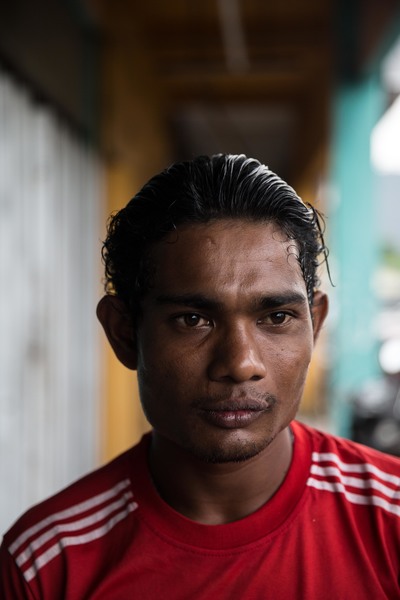 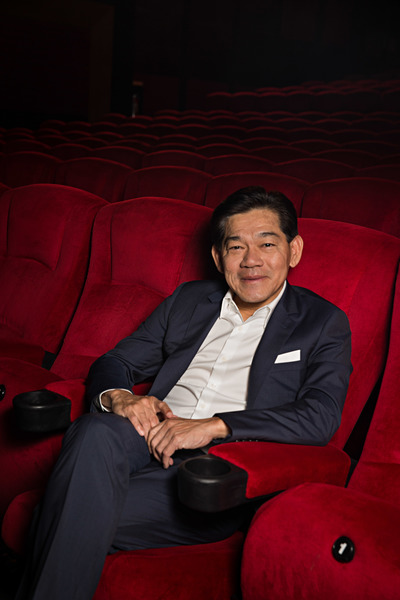 Vicha Poolvaraluck, the founder of the cinema chain Major Cineplex, poses for a portrait in one of the theaters at Major Cineplex Ratchayothin in Bangkok, Thailand.

Betty Sanchez stands in front of her family's home in Tijuana, Mexico on Sunday, September 17, 2017. Betty was never formally deported from the U.S. but lived with her mother and sister in the U.S. and was part of the DACA program until she graduated from high school. When Betty's sister was deported back to Mexico, she returned to care for her sister. Betty has applied formally for U.S. papers so that she can attend a U.S. university, but because her sister has been deported, Betty has been denied entry. Photo by Lauren DeCicca

Daw Myint Myint, 62, and U Aung Bwe, 72, sit in their home in Lay Kay Kaw, a housing project set up by the Government and the Karen Rebel Army after the National Ceasefire Agreement on July 15, 2017 in Myawaddy, Burma. The couple had previously lived in refugee camps on the Thai border for nearly fifteen years before being resettled in Myanmar. Thousands of Burmese migrants returned to Myanmar from Thailand over the past two weeks, as they fled across the border with belongings stuffed into backpacks and duffel bags since the Thai government enacted a new labor regulation, where undocumented migrant laborers can spend up to five years in prison and receive fines between 2,000 to 100,000 baht (US$60 to US$2,935). Over 60,000 migrant workers from Myanmar, Cambodia, Laos, and Vietnam have fled Thailand, fearing arrest after the new labor regulations took effect as the Thai government aims to tackle human trafficking concerns raised by the international community and resolve the growing number of undocumented migrant workers. Based on reports, many illegal migrants take up difficult and dangerous jobs in Thailand's factories and fishing boats but despite the hardship, many of the Burmese migrants still see better hope in Thailand due to the dire poverty in their homeland and a lack of jobs and good wages. (Photo by Lauren DeCicca/Getty Images)

A young Hindu boy and his younger brother wait in line to be registered by Myanmar Immigration Officials at the Dangawadi Stadium on November 2, 2017 in Sittwe, Myanmar. Daw Aung San Suu Kyi, the Nobel laureate who leads Myanmar’s civilian government, visited conflict-battered northern Rakhine state for the first time on Thursday since the outbreak of violence in late August. Based on reports, hundreds of Rohingya Muslims have been killed by the military when the atrocities began while Hindus and Buddhist have also fled the violence in Rakhine state and moved to Buddhist-majority areas, fearing to face the violence again. Burmese immigration officials have since begun reissuing citizenship identification cards to Hindu and Buddhist citizens who fled their homes without carrying their identification cards while the Hindu and Buddhist communities continue to seek safety in Sittwe until the crisis is over. Over 600,000 Rohingya Muslims have crossed over into Bangladesh as international rights groups laid out evidence of an ethnic cleansing campaign across the northern part of Rakhine state. (Photo by Lauren DeCicca/Getty Images)

Faa, a warden, at the Chonburi Central Women's Prison stands at the gaurded entrance to the inmate facilities in Chonburi, Thailand on February 6, 2018. Photo by Lauren DeCicca