All the communication devices in the world are still not enough.

Story can be seen on Buzzfeed News 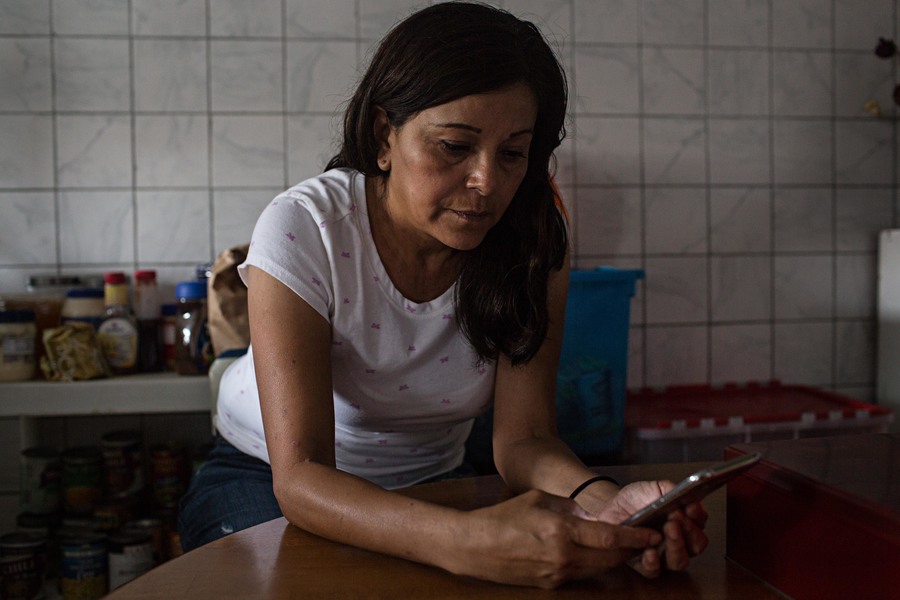 Yolanda Varona checks her phone messages from her daughter. She says that smart phones have dramatically increased her abilitiy to keep in touch with her children and makes it easier to share photos and video chat so that "I'm right there with them" . 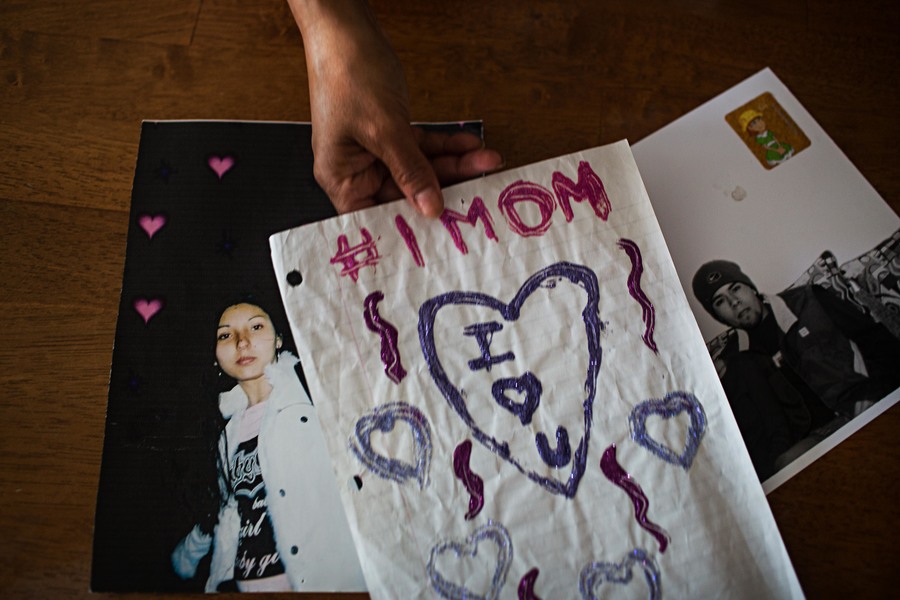 Yolanda Varona, holds a drawing made by her daughter that says "#1 Mom" and "I Heart You". Yolanda was able to collect keepsakes from her time in the U.S. after her son gained his U.S. residency and was able to make trips between San Diego and TIjuana. 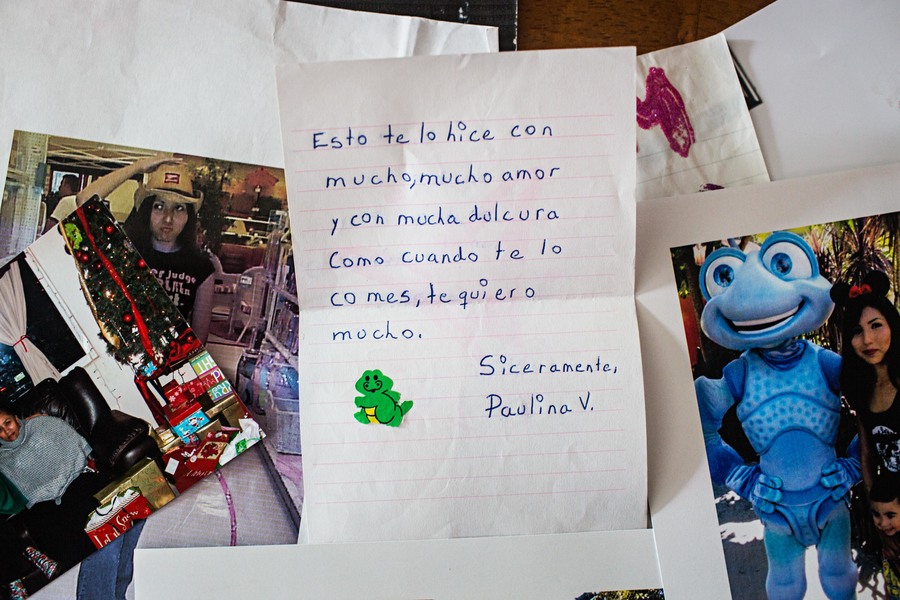 A letter from Yolanda's daughter saved in a box of keepsakes at her apartment in Tijuana, Mexico on September 14, 2017. 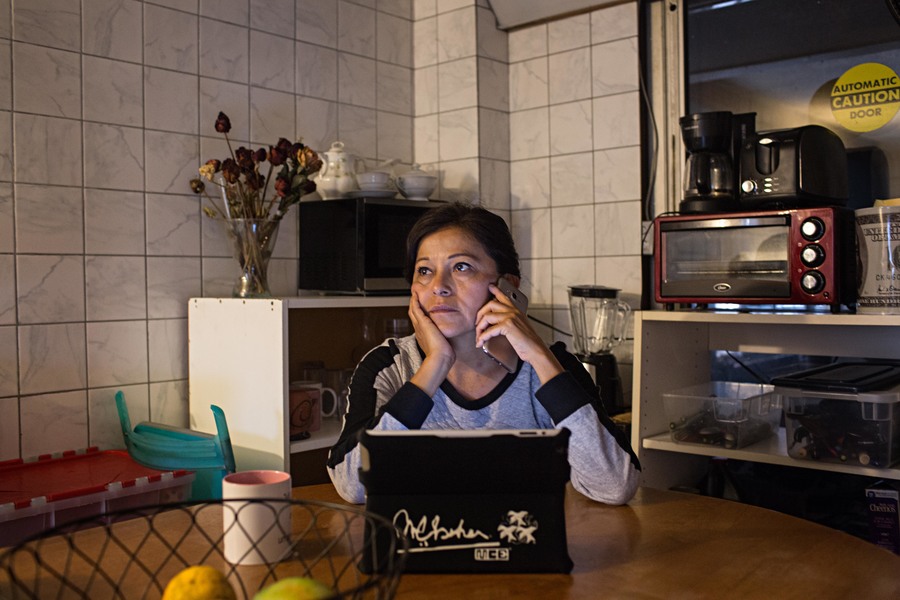 Yolanda Verona makes a phone call to her daughter who is living in San Diego on Monday September 18, 2017. Yolanda hasn't seen her daughter, Annelle, since she was deported 7 years ago. 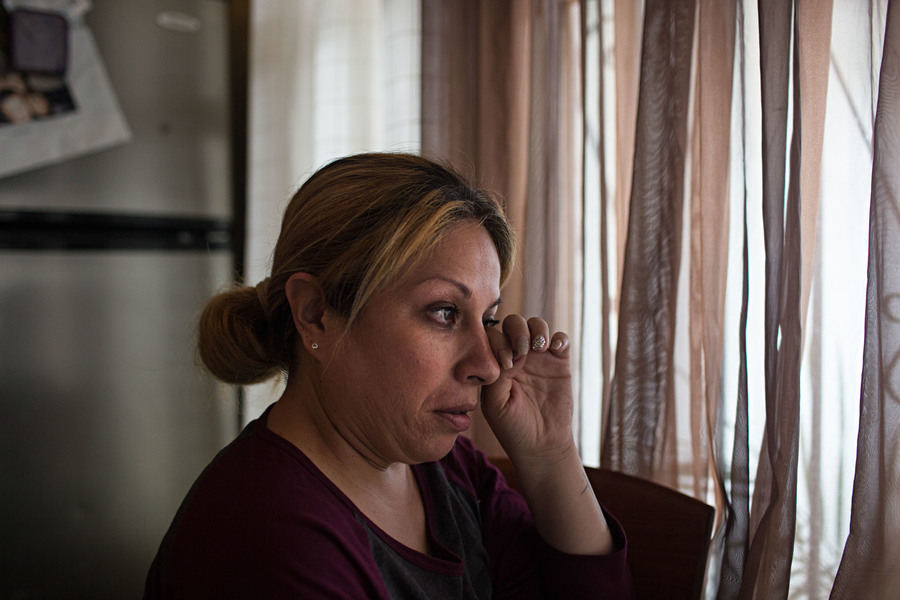 Evelyn Torres cries while thinking about her son, Kevin, in her home in Tijuana, Mexico on September 15, 2017. Evelyn was arrested and deported from the U.S. four years ago. She brought three of her four children with her to the U.S. but her eldest son, Kevin, stayed in the U.S., hoping he could help his mother financially from abroad. Kevin remains undocumented in the U.S. and was in foster care until he recently reached the age 18. Evelyn hasn't seen her son in 4 years and they're only able to communicate sporadically over the phone. 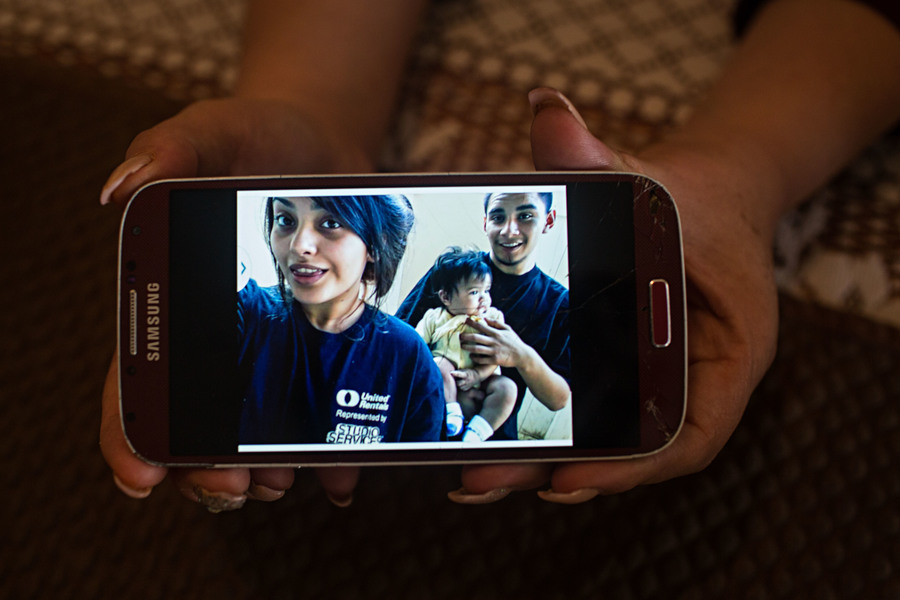 Evelyn shows a photo of her 18 year old son, Kevin, with his girlfriend and fourth month old baby daughter. Evelyn hasn't seen her son Kevin since she was deported 4 years ago. 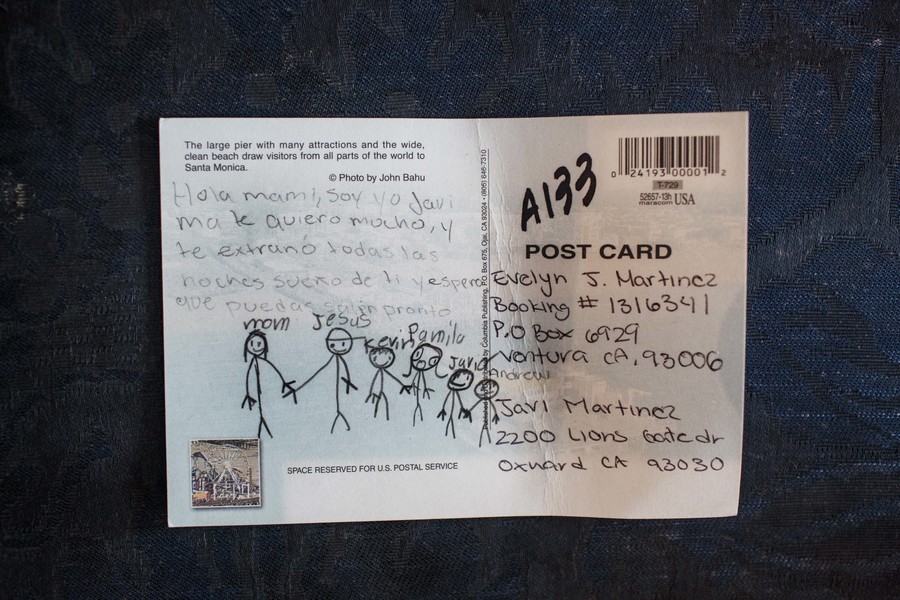 A postcard addressed to Evelyn Torres depicting her family together and holding hands. Before Evelyn Torres was deported from the U.S. she spent over 5 months in jail with only one visit allowed from family. During this time she said the most important things she recieved were postcards from her children. 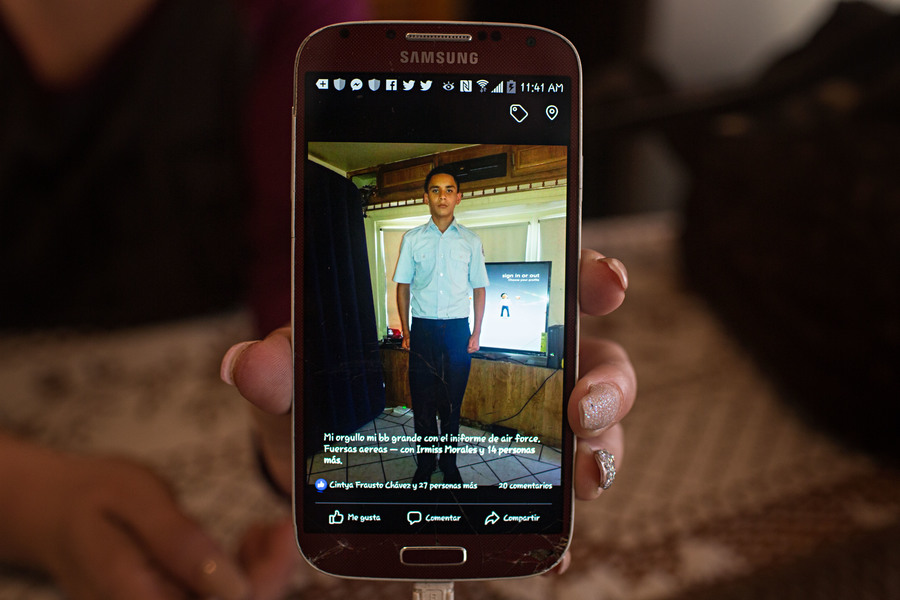 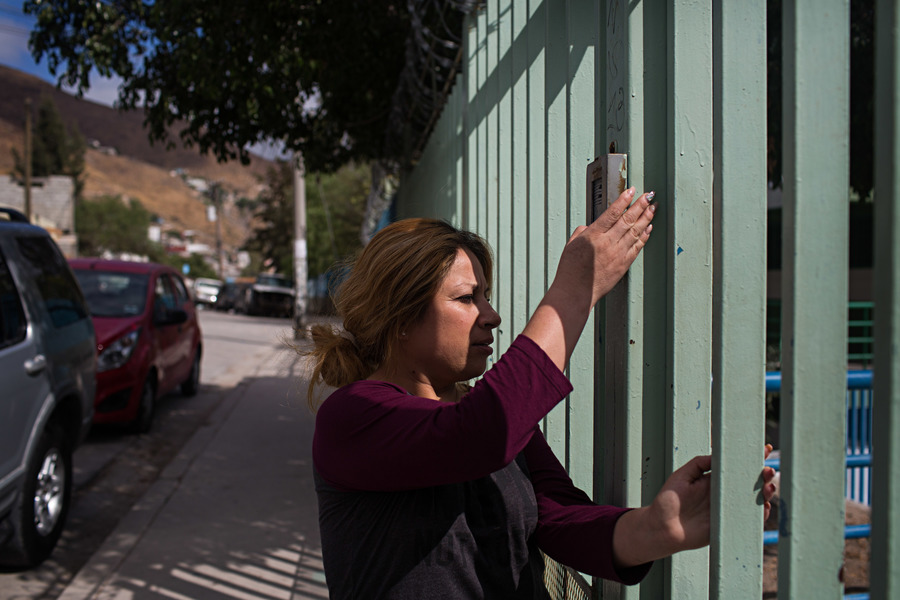 Evelyn Torres opens the gate to her son, Javier's, school to give him lunch money in Tijuana, Mexico on September 15, 2017. 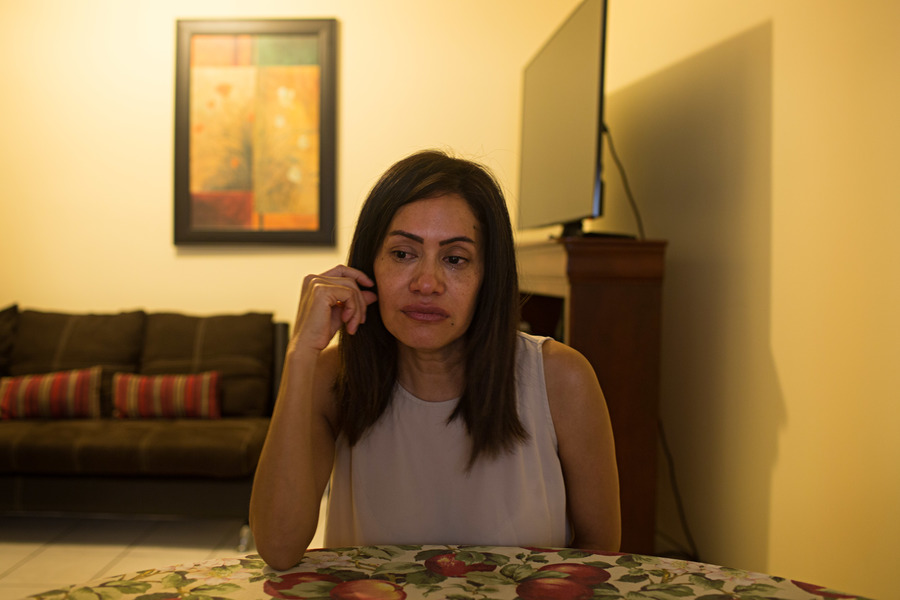 Marylu Montalvo begins to cry when talking about being deported from the U.S. and being unable to see her four children who still live in the United States. 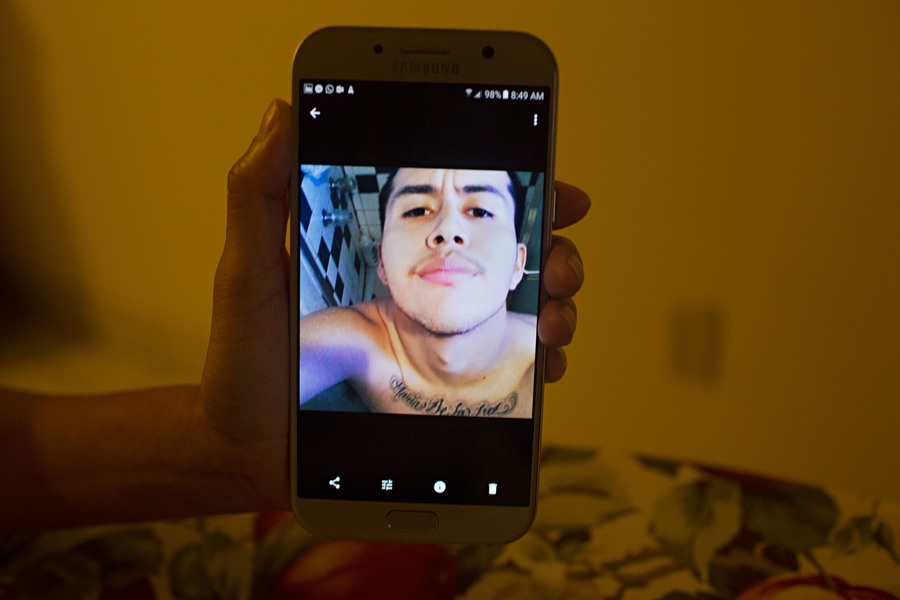 Marylu Montalvo shows a recent photo of her 21 year old son, Chris, who is living in the U.S. undocumented and hasn't been able to see his mother in 7 years.

Marylu Montalvo, shows a recent photo of her eldest daughter, Aileen. Aileen is Marylu's only child who still visits her in Tijuana.

Marylu Montalvo shows the last photo she took with her two youngest children, Charlie and Angelina, who last visited Tijuana 3 years ago.

Monserrat Godoy sits in her small apartment in Tijuana, Mexico on September 16, 2017. Monserrat moved to the U.S. with her new husband when she was 17 years old to live with his family members in North Carolina. Both Monserrat and her husband were undocumented and crossed the border through the help of Coyotes through Texas. After years of living in the U.S. her husband forced her back to Mexico. Monserrat attempted to make her way back over the border through the help of coyotes 3 times since leaving the U.S. and during her first attempt, she was jailed and officially deported. She's only had limited phone access to her children since, but hasn't heard from them in the last few years.

A keepsake photo Monserrat Godoy carries of her daughters who still live in North Carolina.

Monserrat Godoy shows a birthday card that she tried to send to her daughter in North Carolina.

Emma Sanchez blows a kiss to her sons in San Diego over skype in Tijuana, Mexico on September 15, 2017.

Emma Sanchez watches her youngest son Brannon brush his teeth in San Diego over skype from her home in Tijuana, Mexico on September 15, 2017.

Photos of Emma Sanchez, Michael Paulsen, and their three sons's hangs on the wall of Emma's home in Tijuana, Mexico on September 17, 2017.

Emma Sanches talks to her son, Ryan, while her eldest son, Alex, relaxes in the back of her home in Tijuana, Mexico on September 17, 2017. Emma's husband and three sons visit Tijuana from San Diego every 15 days to see their mom for the weekend.

Evelyn Torres and her son, Andrew, look out at Tijuana from their family's rooftop on September 15, 2017.